In the first part we publish one of Sahar Ammar’s poems, which represents her artwork and the short CV of the author. In the second part of the presentation, readers can read about Tunisian literature, Ammar’s poetic creed and her attitude to the contemporary history. In the third part the author recommends us her favourite books – which were written by Arabic writers – and places in Tunisia.

Sahar Ammar, writer and poet, was born in Sfax (Tunisia) on 12th April, 1993. She is a student at the Faculty of Law (public law) in Sfax.
She began writing when she was 8 years old and published her first book when she was 12. She published 3 books already: the letter of peace, the secret of the appeal and the half of the moon.
Some of her literary works were published in national and international journals. She won 20 national and international awards in the field of short story and poetry, for example the award of the writer Abdel-Aziz Hajtaieb for best Tunisian talented youth (2010), the first prize and the gold medal in the International Competition for Talented Writers in Egypt, organized by the National Council for Children's Culture in Cairo (2009), the special prize in the International Competition of Literary Translation of Francophone Poets in Quebec, Canada (2010), First prize in the Competition of the Writer Saleh Hlal in Egypt (2013).
She is a member of the Parliament for Tunisian Youth, the Youth Group of the International Network for Rights and Development, the World Federation for Culture and Literature, the Educational Youth Network, the Association Thought Without Borders (2013) and she is a correspondent for Al-Jazeera Talk Network (2012).
She represented Tunisia in the 2nd International Forum of Young Poetesses in Baku, Azerbaijan.

Sahar Ammar’s own words about the start and her interest in literature: “I grew up in a family interested in literary and cultural issues, a family who believes in the importance and the power of literature and culture in making the change. From here, the love and the attachment to literature was born in my soul.
I was always seeing in the pages and the letters of the book mysteries, appeals and tales coming from a holy and sacred world.   I remember when I was accompanying my parents to the public library in my town and I was the youngest reader there.
My passion to books didn’t stop on the thresholds of reading; writing became my way to translate my feelings, my hopes, my imagination and my thoughts, and to paint the features of my own worlds.
I started writing at the age of 8 with my first story the light of the forest and I published my first book the letter of peace (collection of short stories) when I was 12.” 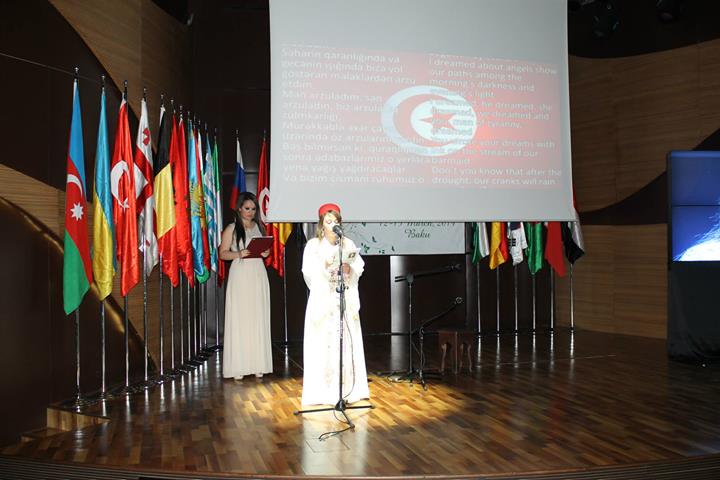 The light of freedom

I dreamed about beam dawn shines from the east at sunset
I dreamed about wound smiling
About loud laughter begotten by scars
I dreamed about angels show us our paths among the morning’s darkness and evening’s light
I dreamed, he dreamed, she dreamed, we dreamed and you, men of tyranny, dreamed
You wrote your dreams with ink on our streams and our rivers
Don’t you know that after the drought, our wings will quench our land
And if our torrential seoul invade the squares
They will erase your lines
The dams don’t discourage us
If freedom’s storms apostrophize and protect us
If graves of the nineteenth century woke up and nourished us with struggle
The Arab dream, brothers, is cub exiled in a desert
So that the time covered it with shroud of immemorial years
The flames burned it and it became like a pyramid of dusty bones
It became an ash, a prey for the passing breeze
Sir, we are moving on the revolutionary steps
We are the sons of the breeze and wind
Of land and sea
We were born under the shade of palm and olive
We resist for our homeland, for life
For lullaby holding tones of victory
We resist for the seed of freedom in our national land
For the white doves fluttering in the our sky, we resist
Brothers, this is a wedding for freedom
Do you see her, freedom, waddling behind a transparent veil
Look there in the last path, dears
She dropped her holy dress on the land of Carthage
The freedom is as great as Carthage
She arrived to the people in the eve’s dawn
She washed the sky with dew from the defile of darkness
She washed them who lit a candle in the darkness of prison from the pride’s light
We waited for her
The freedom
Our mouths dried from shouting and pray and appeal
In every span, our throats whooped
Among the ruins of the mining basin
From the deep of crypts
From misery’s nozzle in tunnels
From a beach telling the story of the folk
From the twentieth floor apartment
From a hut ready for the fall
From our flesh and our blood
From our fear of our toes
From our unhappiness and our joy
From fingers of our hands and our foots
From a rag covering our bodies
Of each tattoo appearing on our faces
Our freedom is as big as the Mediterranean
As numerous as the boats between its waves
As long as the hair of a girl in the oasis
As radiant as the ears which witnessed the arrogance of the switcher
As long as the hours of sit-in in the plazas
As long as the necks yearning to freedom’s sun and moon
As long as the eyelashes waiting for a lover’s arrival
Dears, we made from the splats of our bodied a path for freedom
From our oil, we made the lamp for freedom
From our songs, we plant in every mouth a cooing for freedom
From the lights on our eyes, we draw the fulgurites shining in our nights like a guide
O dears, did you see her right there
The freedom, pure and holy
She found the path in the dawn
And we found the path in the dawn
She is walking and we are walking
Freedom, we will meet you there
Where humans had learned how to sacrifice for you